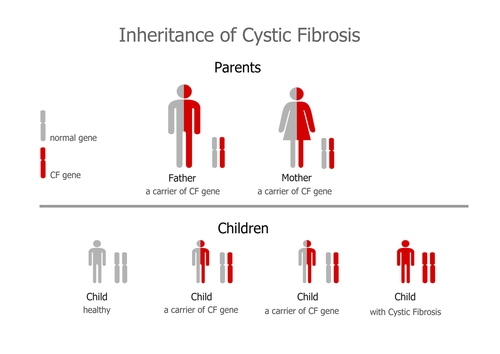 What is cystic fibrosis?

Cystic fibrosis is an inherited condition that is caused by mutation of a gene found at the chromosome 7. It is more common among people of Northern European ancestry. The disease causes sticky mucus to build up in the lungs, digestive system and other organs. This causes lung infections, problems with digesting food and a number of related conditions such as diabetes, liver problems, osteoporosis and infertility in males.

The gene associated with cystic fibrosis was found in 1989. The commonest gene mutation is called f508del or ΔF508. This mutation is found in 70% of people in North America, whereas in Greece it is estimated to exist in 50-55% of the population. Almost 2000 mutations causing cystic fibrosis have been found.

The gene that is related to cystic fibrosis codes for the production of the protein Cystic Fibrosis Transmembrane Regulator (CFTR). Dysfunction of this gene results in problematic production or function of a protein that regulates the transfer of chloride ion between cells. As a result, sticky mucous is produced that blocks the ducts of glands in various organs.

Cystic fibrosis is inherited in an autosomal recessive manner. People who suffer from the disease have mutations in both copies of the gene for the CFTR. Those with a single working copy are carriers and otherwise healthy.

It is estimated that 50-60 children per year are born with cystic fibrosis in Greece, whereas the carriers represent 4-5% of the general population (almost 500.000 Greeks). The most common mutation found in the Greek population is the f508del or Δf508.

The main characteristic of the disease is the production of sticky mucus that blocks the glands of various organs, mainly the lungs and pancreas. This results in severe pancreatic failure from an early age and serious chronic lung infections that gradually destroy the lungs and lead to respiratory failure.

The prenatal test for Cystic Fibrosis is performed with chorionic villus sampling (CVS) or amniocentesis if both parents are carriers of a mutation, if the couple already has an affected child or is there are findings at the fetal ultrasound such as echogenic bowel.

For more information you could visit the following website: www.cysticfibrosis.gr