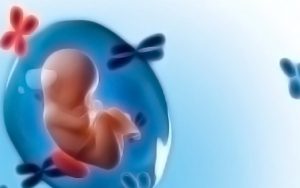 The majority of fetuses are normal. Nevertheless, all women, regardless of their age, have a slight possibility of carrying a baby with a structural or a mental problem.

In some cases, the problem is due to a chromosomal abnormality like trisomy 21 (Down’s syndrome). The Non- Invasive Prenatal Test (NIPT) is the method of detecting cell-free fetal DNA in the maternal blood and one of the most reliable methods to estimate the possibility of carrying a fetus with trisomy 21.

What is the cell-free fetal DNA test or NIPT?

It is the method that analyses cell-free fetal DNA which is circulating in the maternal blood and it appears to be a highly accurate method for assessing the possibility of the fetus to have Down’s syndrome. It also assesses the risk for the fetus to have trisomy 18 (Edward’s syndrome) and trisomy 13 (Patau’s syndrome).

However, the only way to diagnose if the fetus has a chromosomal abnormality is to conduct an invasive diagnostic test i.e. chorionic villus sampling (CVS) at 11-14 weeks or amniocentecis after 16 weeks of pregnancy. Due to the fact that a needle is inserted into the uterus to take the sample from the placenta (CVS) or the amniotic fluid (amniocentesis), these invasive methods are linked to a risk of miscarriage around 0.5%-1%.

When can NIPT be performed?

The test for detecting cell-free fetal DNA can be performed after 10 weeks of gestation.

When am I going to receive the results?

You are going to be given the results usually within 10-12 days. You should however be aware that there is a 5% possibility of not having any results. This is due to possible technical problems and does not imply that the fetus has a problem. The test will be re-conducted without an additional charge and there is a possibility of 50% to get results.

What do the results show?

The test shows if there is a high or low possibility of the fetus to have trisomy 21, 18 or 13. If you would like to be sure that the fetus does not have any of the trisomies mentioned above, you are advised to have an invasive test such as CVS or amniocentesis. If the test shows there is a low possibility (less than 1 out of 10.000) that the fetus has trisomy 21, 18 or 13, it is almost impossible that the baby has any of these syndromes. The test can detect more than 99% but not all fetuses with trisomy 21, 98% of those with trisomy 18 and 80% of those with trisomy 13.

Are there any further examinations needed?

The NIPT does not give us any information about structural fetal abnormalities e.g. spina bifida or cardiac problems. It is thus suggested that we conduct ultrasound examination at 11-14 and 20-24 weeks of gestation to thoroughly assess the fetal anatomy.