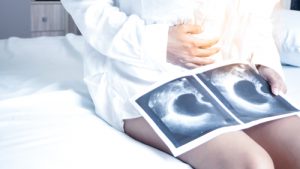 The ovaries are the female reproductive organs that release one oocyte per month that usually measures 2-3 cm.

Ovarian cyst is considered an ovarian fluid collection >3cm in diameter. The cyst might have thin wall and contain only fluid (simple cyst) or it might be complex with thick fluid, solid elements or blood.

The ovarian cysts are common and usually benign. Most women are unaware that they have an ovarian cyst because usually these are asymptomatic.

However, 1 in 10 women might need to be operated for an ovarian cyst at some point in her life.

The correct assessment of the nature of an ovarian cyst (benign or malignant) is partly possible with the ultrasound examination that needs to be performed by an experienced specialized gynaecologist.

Common types of ovarian cysts before the menopause

The most frequent ovarian cysts during the woman’s reproductive years are functional cysts that are benign.

Taking into consideration the woman’s family history, the clinical examination findings and specific morphological features of the cyst on the ultrasound examination, we could estimate with great sensitivity if this is a benign or malignant cyst. This is crucial in order to decide if the cyst needs to be removed and if so, the type of surgery that needs to be performed.

Women who have a family history that increases their risk of developing ovarian cancer, it is recommended to have frequent gynaecological and ultrasound examination.